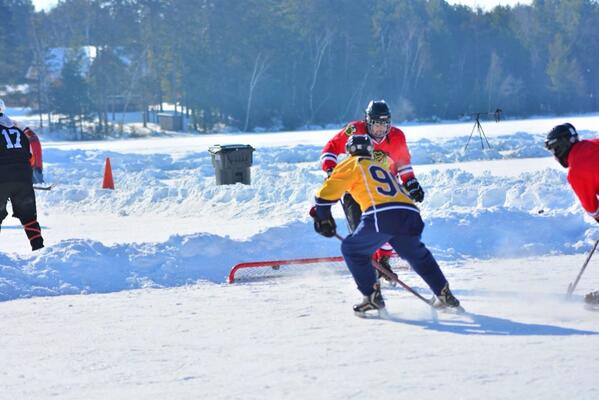 THIS OPPORTUNITY IS MANAGED AND RUN BY BLUE ASH RECREATION DEPARTMENT AND NOT DIRECTLY AFFILIATED WITH CAHL. PLEASE DO NOT CONTACT CAHL WITH QUESTIONS!

DOWNLOAD THE APPLICATION HERE (CONTAINS ALL INFORMATION BELOW): https://www.cincyahl.com/images/Blue%20Ash%203on3%20Pond%20Hockey%20Registration.pdf

The intent and nature of this league is to provide a fun, relaxed “back yard” open-hockey style of play in the form of pond hockey (also known as “Shinny”). Games are self-officiated and respect for all players is of the upmost paramount in this setting. Participants who are not playing in accordance to this philosophy will be asked to leave the ice surface immediately and will not be permitted to return to the league.

1. The Visiting Team will determine which goal to defend. Teams will switch goals after first half. Games will begin with a
3-tap faceoff at center ice (the opposing players will tap each other’s stick three times, above the puck, prior to battling for
possession). Teams comprise of 3 players for each team (no goalie) on the ice at one time.
2. No on-ice officials will be provided due to the nature of the “pond hockey” element of back yard play. However, an office game monitor will be provided to assist teams (scoring, time keeping, and shall act as an arbiter of major infractions).
Game start time, halftime and the end time will be kept by the off-ice game monitor and signaled by a whistle.
3. Icing and off-sides will not be in effect at any time during games.
4. All teams must have light and dark jerseys or uniforms available at all times. Home teams will wear dark.
5. All players must wear helmets and hockey skates. Other protective equipment is optional but recommended.
6. Minor Penalties: By nature of the game, Pond Hockey operates on a “self-penalization” standard. By observation, any
minor fouls (tripping, slashing, hooking, inadvertent body contact, etc.) that are committed, the offending players’ team will
(AND SHOULD) eliminate themselves from active play by giving the non-offending team ½ ice to recover from the
infraction. In this “spirit of the game” environment, it is expected that all players cooperate with each other and work in
uniform to keep a fun and friendly atmosphere on the ice.
7. Major Penalties: The off-ice game monitor will have the discretion to eject a team or player should a penalty be flagrant
and/or a team is consistently playing in a reckless manner. Any major penalty, which includes any action that could
possibly injure another player, will result in that player being ejected from the game. Abuse of the off-ice game monitor will
be considered a major penalty. This includes yelling, swearing, or arguing at the off-ice game monitor. The team that
received the ejection will play the remainder of the game short-handed (2 vs 3). Off-ice pond official will determine major
penalties. Any player(s) ejected from a game is suspended from the league until further notice from the league manager.
8. Body contact and checking is NOT permitted. Such action that was inadvertent will result in a minor penalty unless the
intent is deemed serious enough to be a major penalty (see “#7. Major Penalties”).
9. NO SLAPSHOTS ARE ALLOWED. Such action will result in a player being removed from the game immediately and
the team will play the remainder of the game short-handed (2 vs 3). Saucer passes (i.e. pucks that are lifted low, below
the knee) are acceptable. Saucer passes above the knee will result in a loss of possession and a ½ ice re-start.
10. Goaltending: Goaltending, goalie equipment and goalie sticks are not permitted. Players “defending” the goal may
only do so while moving through the area and shall not “camp out” in front of the goal. For safety, players cannot fall or
lay on the ice in an effort to protect the goal area. Such action will result in a minor penalty.
11. If a puck goes out of bounds, the last team to touch it loses possession (except from a deflection). During the re-start,
the offending team must give the opponent ½ ice before re-engaging.
12. Goals must be scored from the attacking side of center ice. Teams must give their opponents ½ ice after a goal is
scored before re-engaging.
13. Games will be composed of a running time of two 15-minute halves with a 2-minute halftime. Regular season games
will end in a tie. Tournament games will consist of 5-minute sudden death over-times until a team scores.
14. Substitutions can only be made during stoppages of play or during a situation in which play is being “re-started” (i.e.
after a goal, after a minor infraction, or when a puck is being put back into play). It is up to each team to ensure that there
are only three players on the ice at any time.

DOWNLOAD THE APPLICATION HERE (CONTAINS ALL INFORMATION ABOVE): https://www.cincyahl.com/images/Blue%20Ash%203on3%20Pond%20Hockey%20Registration.pdf